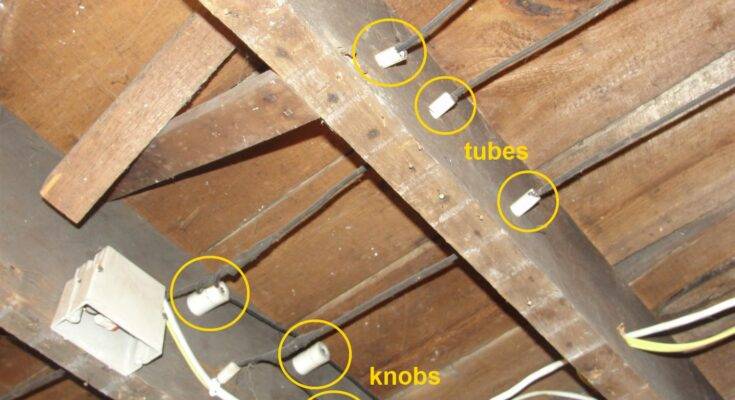 One of the earliest standardized forms of wiring used in homes is commonly known as Knob & Tube (K&T). This type of wiring was installed in homes up until and including the 1940s. K&T wiring systems consist of 2 wires, one live and one neutral, sheathed in rubber and/or cloth insulation. In unobstructed areas, the bare conductor wires are routed through open air space and are clamped into place with porcelain knobs nailed to the wood framing. Since porcelain is an effective electrical insulator, the conductor is isolated from the wood frame of the house. Where wires run through structural elements such as studs or joists, the wires are fed through a porcelain tube which acts as the insulator between the conductor and the house frame.

With K&T wiring, if the system is in good condition it can be safely operated however there are a couple of problems or limitations:

No Safety Ground (the Third Wire)

Unlike modern wiring, K&T has no safety ground wire (the third wire in modern systems) increasing the possibility of getting a shock or electrocuted. The purpose of the safety ground is to provide a low resistance bond between the metal enclosure or electrically conductive portions around electrical devices and a natural earth ground. In laymen’s terms, the safety ground provides a direct path to the earth for electrical appliances in the case of a malfunction. Without a safety ground, if the live conductor touches the metal housing of an appliance or tool, due to an internal failure, the housing will rise to the same voltage as the conductor. If a person then touches that metal housing, their body will become the path of least resistance to ground and they will receive a shock. As discussed above, with the ground wire, fault currents follow the path of least resistance (through the ground wire) instead of flowing through the home owners body. Fault current can get very large and are larger than a home’s electrical wiring can sustain for any length of time. For this reason, a circuit over current protection system such as fuses or breakers) are installed to break the circuit and stop the flow of current before the wiring is overheated and damaged.

Another point to be aware of with K&T wiring is that a two wire system also means two pronged outlets. This means you can’t plug in modern appliances with three prongs without using a three to two adapter, commonly known as a cheater plug. Cheater plugs are not a good idea as they allow a safety feature to be circumvented. Also, many modern electronics devices need a ground connection to operate correctly and may be damaged if plugged into an ungrounded outlet. Devices such as surge protectors (to protect equipment from events like lightning strikes) require a ground connection to provide protection which is not provided by a cheater plug.

Is your Home a Senior Citizen?

Since K&T wiring went out of use in the 1940s, any K&T wiring currently installed in a home is very old. This can often mean that parts of the system have become detached, corroded, contacts loosened and insulation may have broken down or have been damaged. Loose, corroded or damaged connections create points of high electrical resistance which when current is forced through them become hot. This temperature can be hot enough to ignite wood or insulation materials which can cause a house fire. Poor connections or degraded insulation can cause electrical arcing with adjacent conductors or metal structure which also creates heat and sparks, another ignition source for a fire.

Getting with the Times

While K&T wiring provides adequate electrical service for the homes of the earlier part of the last century, times have changed and homes are now full of power hungry appliances (big screen tvs, computers, air conditioners, electric stoves, whirlpool tubs, baseboard heating, etc). The wire gauge and number of circuits used in K&T systems generally restricts the service size to the home to a maximum of 60 amps. Modern homes require a minimum service of 100 amps with homes with components such as, electric heat, a pool and air-conditioning needing close to 200 amps. To properly upgrade a K&T system to modern code requirements will require a complete rewiring of the home; which can be an expensive proposition.

K&T wiring was installed and joined via solder joints without the use of junction boxes, which is no longer per modern code requirements. This unfortunately did not stop many home owners and contractors over the years from illegally and improperly splicing and tapping into K&T circuits as rooms were renovated and homes expanded. This expansion of circuits often causes overloading of circuits and can lead to overheating of conductors which, say it with me, presents a fire hazard. Poor junctions, degraded conductors and overloaded circuits are buried unseen hazards hidden within finely finished walls and ceilings.

K&T wiring is meant to be installed in empty wall and ceiling cavities such that heat can be effectively dissipated into the surrounding air. As these older and often energy inefficient homes are retrofitted with insulation, K&T wiring becomes surrounded (and insulated) which prevents the generated heat from transferring away from the conductors. As these conductors are often already overloaded, the presence of insulation will make a bad situation worse.

If you own a home or are thinking of buying a home that contains K&T wiring, consider the following advice that we provide to our clients.

1. K&T wiring is safe, provided it is inspected and properly maintained by competent licensed inspectors and contractors. The Electrical Safety Authority (ESA) recommends that existing K&T conductors concealed in walls, floor spaces supplying general lighting and receptacle circuits are permitted to remain in place if:

Any functional K&T wiring should be inspected by qualified a inspector/contractor to verify the condition and loading of the circuits.

2. Ground Fault Circuit Interrupter (GFCI) outlets can be installed on a two wire K&T system to improve the safety of the system. In a properly functioning two pronged appliance, the outgoing current and incoming current to the receptacle are completely balanced and the circuit is closed. However, in the event that the live conductor comes loose and is shorted to the metal housing of an appliance, the outgoing and incoming current become imbalanced. In this situation, if you are holding the appliance some or all of the outgoing current will take the path of least resistance directly to ground, which is right through your body and not return to the plug. This will give you a shock which can be painful or even dangerous. GFCIs contain circuitry which detect any imbalance in the outgoing and incoming current and quickly trips the circuit if the imbalance exceeds the detection threshold. In Class A GFCIs, the detection level is set well below the lethal threshold for a person, thus providing a similar level of protection provided by a modern three conductor grounded circuit. If you own a home with K&T wiring, installing GFCI outlets is definitely a good idea.

3. K&T system safety can also be increased through the installation of ground bond wires from each light fixture and outlet to an acceptable earth ground. (Public copper water supply, public gas supply, or grounding rods are all examples of an acceptable earth ground). In this case, all outlets are replaced with modern three prong outlets to accept the ground wire connection. Accomplishing this can be difficult however as it often requires the ground wires to be fished through inaccessible areas. This can mean that wall and ceiling finishing (lathe and plaster, drywall, etc) has to be cut to accommodate access holes which will need to be repaired after the job. In my opinion, if you are going to all this trouble, it probably makes sense to simply replace the circuit wiring with modern three conductor cable and reap the benefits of having new wire. 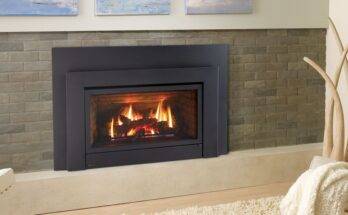 Enjoy The Winter With Gas Inserts Hiring a Professional for a Mold Inspection

How To Prevent White Ant Infestation